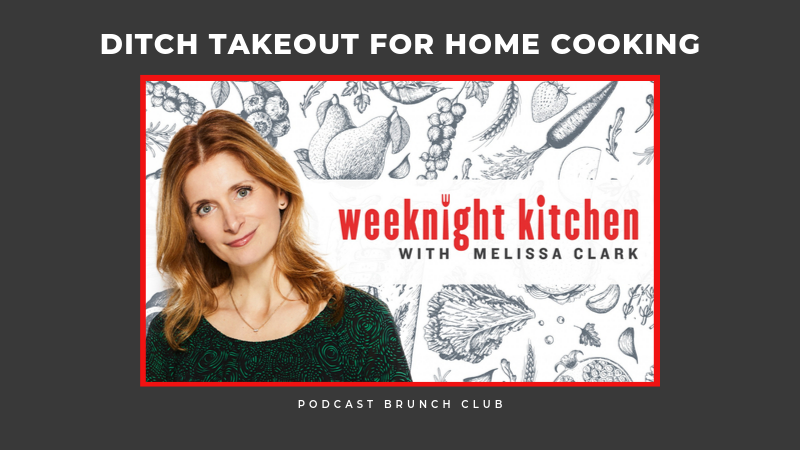 From food delivery apps to prepared meals at the grocery store, it’s easier than ever not to cook your own food. Melissa Clark, a longtime food writer and cookbook author, reminds all of us that cooking at home isn’t so bad in her new podcast, Weeknight Kitchen.

In each episode Melissa takes on one of the biggest dilemmas we all face — what are we going to eat? While working in her home kitchen, she works through one of her favorite recipes offering advice for both beginner and expert cooks.

The show is produced in partnership with The Splendid Table, which describes it as “a practical guide to weeknight eating.”

It’s one part Food Network and one part conversation with an old friend over a glass of wine. I was intrigued by the first episode and reached out to Melissa to learn more about the show.

How did the idea for the show come about?

My producer Sally Swift and I collaborated on the concept. We knew we wanted to work together on a food show. My original idea was to focus on one iconic dish per episode, but to take it in a more historical/cultural direction, and to talk about how the dish came into being and how it’s evolved, then explore the different techniques used to cook it — all through a series of interviews.

Then Sally took the idea of one dish, but refocused it to center just on the cooking of one thing that you could make for dinner on a weeknight. So the concept went from education/history to something more inspirational and practical.

The brilliant thing was for her to suggest that I cook a dish, in my kitchen, all the way through while people listened in. It makes it both intimate and informational – almost like the cooking video series I used to do for the New York Times, except only the audio part. Which means I don’t have to put on makeup to do it.

What challenges did you face while figuring out how to record and cook at the same time? What have you learned along the way?

We are still learning and tweaking as we go – which cooking sounds are the most enticing? Which sounds are better edited out? We used to include a lot of hand washing (which I do obsessively as I cook). But is definitely not as appealing to listen to as, say, sizzling or chopping.

It’s all an evolving learning process for me. I’m not used to cooking by ear, so it’s a new way to think about the anatomy of a dish, and slowing it down to highlight what its particular sounds are. I never paid attention to the sound of raw rice falling into milk for a rice pudding, or the wet slap of cutlets getting coated in egg. It adds another layer to the sensuousness of cooking.

Then there’s the chatter, the one-way conversation that I’m having with the listener. I make sure to include both stories and practical cooking tips, and I try not to just ramble. The tips are the easiest part for me because I’m used to saying them out loud from shooting cooking videos. But now I need to describe things in a much more concrete way – I need to show the listener through spoken words what it is that I’m seeing.

I started my career as a writer. Then I expanded into video. And in a way, podcasts split the difference between the two because language and words become so much more important than in video, where image takes over.

Could someone make the recipe along with you during the episode? Is that the goal?

They could if they paused the episode, but that’s not the goal. The goal is to inspire and inform. You should listen to the episode, get hungry and excited about cooking something, then use all the tidbits you’ve learned from listening to help you when you’re in your own kitchen.

What do you hope people take from the show?

I always say, put on your favorite music, open a bottle of wine and revel in the process of making yourself and your loved ones something delicious to eat. Make meal prep time YOUR time. Otherwise it can be a drag set on repeat.

If people like this podcast, what are a few others that you recommend they listen to?

There are so many great, food-related podcasts, including The Splendid Table, Spilled Milk, Keep Calm and Cook On, The Sporkful, Cherry Bombe, Eater, Gravy.